Yoel Romero vs Israel Adesanya is set as the main event for UFC 248. The card takes place this Saturday inside the T-Mobile Arena.

Here are the predictions for the UFC 248 fight card.

Romero will be Adesanya’s toughest challenge to date. Although “The Soldier of God” has an Olympic Silver medal in freestyle wrestling, he has a takedown average of 1.79 per fifteen minutes. It is mainly because he has attempted very few takedowns in his career. Exploding from a distance and catching his opponents off guard seems to be the ideal weapon of choice for Romero.

When it comes to his striking, he has a striking accuracy of 49% with 3.71 significant strikes landed per minute. Romero has an iron chin and he can withstand an absurd amount of punishment.

On the other hand, Adesanya is the better striker with 4.46 significant strikes per minute. He likes to pick his shots and make his opponents pay for every mistake they make. Adesanya has a high takedown defence of 85%.

Standing at 6 ft 4 in, Adesanya has a reach of 80 inches. He utilises his reach to keep his opponents at bay. This will help him immensely because Romero likes to explode on his opponents from a distance. With his footwork, Adesanya should be able to move out of danger wherever Romero attempts to close the gap.

Romero does tend to throw away a few rounds. The key to Adesanya’s victory is to constantly touch the challenger while not overcommitting to strikes. One slip could be fatal for the champion. Considering the durability of Romero, it will be tough for Adesanya to finish him.

Wrestling could be a huge factor for Romero but since he does not utilise it, Adesanya will fully exploit the holes in Romero’s striking.

Newly crowned women’s strawweight champion, Weili Zhang will defend her title against one of the greatest strawweights of all time, Joanna Jedrzejczyk. On the feet, Joanna is way better than Weili. She is a sniper who can pick apart Weili on the feet. 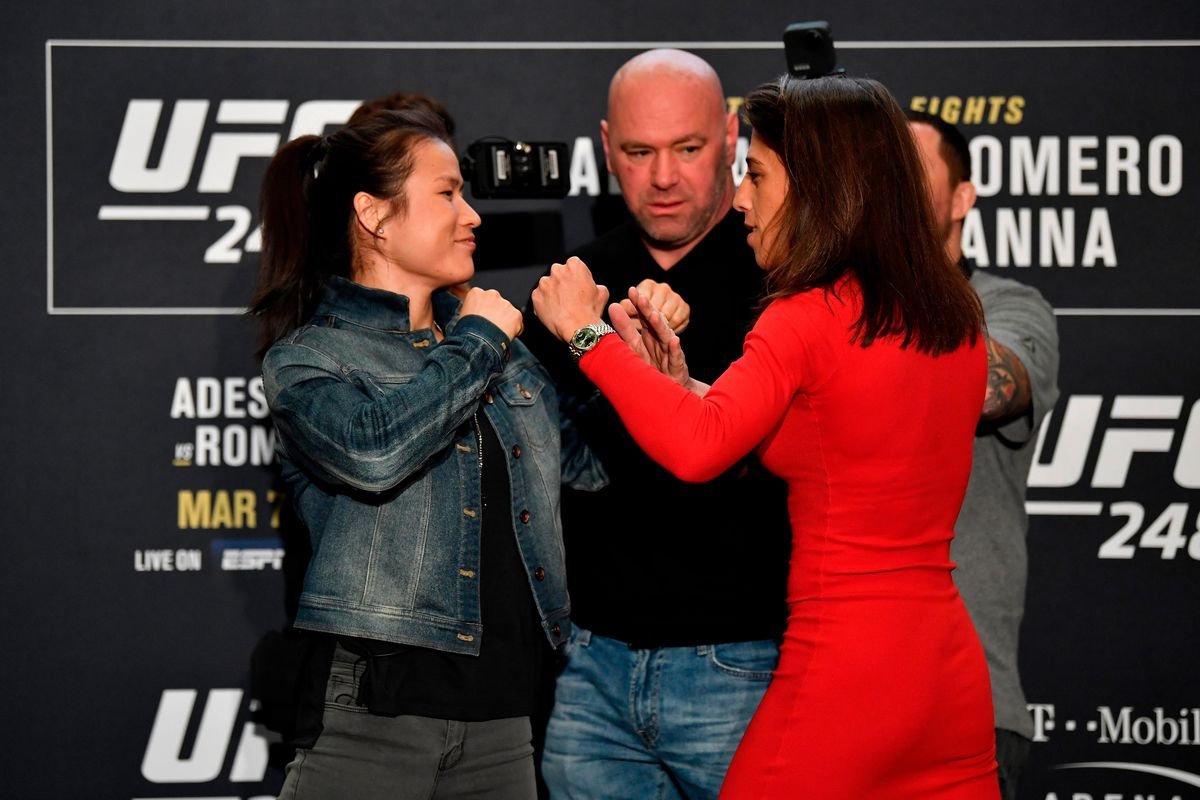 Joanna’s distance management is better than anyone in the division. She can move in and out on her opponent with lightning-fast speed.

On the other hand, Weili does have the power to hurt Joanna. She can back off Joanna with her power but Joanna is too slick with her striking. It will also be near impossible for Weili to get Joanna to the ground as Joanna has a takedown defence of 85%.

66% of Joanna’s fights went to a decision and considering Weili’s ability to take punishment, it is highly likely that this fight will go to the judges’ scorecards as well.

This is a potential fight of the night match. Dariush is a fast starter who can decimate his opponents early on. Along with his Muay Thai, he also possesses excellent jiu-jitsu.

On the other hand, Klose is the more athletic and tougher of the two. He also has incredible wrestling skills. His grit has been the key to his victories. Since Dariush has sustained more damage in his career, Klose will have the advantage.

If Klose can weather the early storm by Dariush, he can then take control over an exhausted Dariush as the fight progresses. The bout will be an absolute war but only one will prevail.

After suffering a KO loss at the hands of Santiago Ponzinibbio, Neil Magny returns to action to take on Li Jingliang.

Jingliang has a very strong jab and a good right overhand. He has enough power in his hands to knock anyone out. He also has a very good takedown defence of 62% which is crucial against a fighter like Neil Magny. The leg kicks of Jingliang are devastating.

Magny has a takedown accuracy of 46%, he has fought some of the very best in the UFC. Magny’s cardio will be a major factor in this match. If Jingliang does not pace himself correctly, he may tire himself out which will favour Magny.

Max Griffin (15-7) depends largely on his durability. He has heavy hands which will ultimately lead to a brawl. Alex Oliveira is the cleaner striker among the two with much more power than Griffin. Eventually, Oliveira will catch Griffin and knock him out.

This fight is easy to miss and it takes in the prelims of the UFC 248.

Undefeated bantamweight Sean O’Malley (10-0) makes his return to the octagon after a two-year lay-off. However, during his time off, he has been active and competing in Brazilian jiu-jitsu competitions. He has a 50% takedown accuracy.

On paper, O’Malley is the better fighter, but due to the long lay off from MMA, he might start a little slower than usual.

Continue the conversation on the app, join other MMA fans on MMA Fans App